Love is the answer! Well, it's the answer I'll take. Never met the guy, but we were Facebook friends. I'd hoped to meet him sometime or other, but it just didn't happen. But I did get to hear something on his YouTube page. Beautiful singing voice!

Strangely enough, it was a song I don't ordinarily like. Roy Orbison's Crying. But Sam won me over. Happy trails, pal. Maybe I'll get to meet you down the road..*

Not much for news today. I just posted something on my You Tube page. Like Someone in Love. Great old Jimmy Van Heusen tune. He also gave us But Beautiful and Darn that Dream. It's up on Facebook as well.

This is still the place to go to hear some of my stuff. A variety of albums. Always working on new stuff in that area. Especially these past couple years.

I do believe this is the skimpiest post I've written. But sometimes no news is good news. I did learn a new word though. Spiegel. Pronounced SHPEE-gel. It's  a German word, and means mirror. It was a song title. Spiegel im Spiegel, which would mean mirrors within mirrors. The infinite mirror.

Anyway! Time to wrap this up. Lumosity and Wordle await. So thanks as ever for stopping in and reading. Happy Donnerstag to you! For now, ich bin outa here. More later. 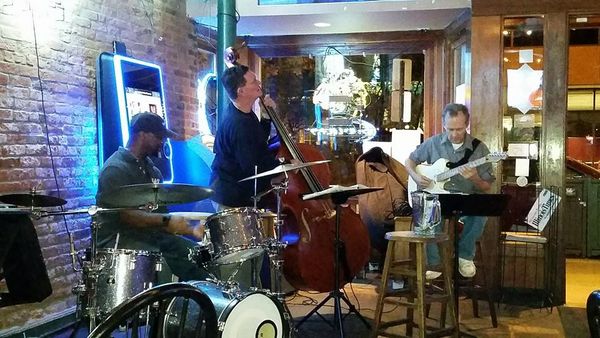 PS today's pic was taken at the Alamo in I think 2016. Mark McKnight, Rob Killam and me. Frank Parker and Buddy Rogers were also on this gig.

*I don't have it in writing, but I'm pretty sure that life continues. That's all I know, and I've said too much already...