Good morning! 9:44 and 70 degrees. A perfect day on tap. Got that extra hour of sleep this morning.. Luxury winks. I've been going on seven or a little under that for the past week. Enough to fuel me, but not enough to feel fully rested. So this is a good start to the day.

Domestic news. This is an exercise day. I should be getting more than I get, but I try for at least two workouts in a week. Got one in on Wednesday, so this is my last day to redeem myself. These sessions take about 40 minutes, and work the legs, upper body and gut. And then it's about an hour recuperating...

Musician news. Working on the guitar a bit more these days. I like to alternate between playing and writing. And I always seem to have one in the fire as far as writing/studio projects. I'll get back to it sooner or later. But some things are starting to come together on the guitar---after 56 years of trying! So that's where the energy is going at the moment.

I have a couple solo guitar things coming up, both of them the week after next. . They're both private affairs, so unfortunately, I can't invite you. But they're my trips out of the house for the month.

The sporadic Ocean State gigs--in January, April and August of this year--have worked out real well. I'm not in the band anymore, but  seem to be their de facto 4th member. I'm there playing the gigs. So I'll probably be back with them again before the end of the year.

And eventually I'll have another gig of my own back at Boone's, when it comes around in the rotation. So there's more to come. Still in there, just not as often.

Anyway! Some new posts, at least one of which will go up on YouTube, for your listening pleasure. So thanks as ever for stopping in and reading. Happy Saturday to you! For now, ich bin outa this place. More later.  PS today's pic was taken at a local bar on Carpenter Street, year unknown. Steve Adleman on drums and Gene Haas on bass. 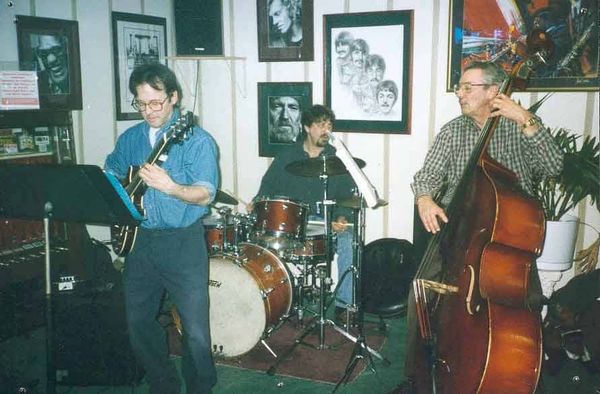