Greetings, whoever-reads-this! It's a beautiful day in the neighborhood. Just getting ready to get into some kinda trouble here.

Well I had two engagements scheduled for this week. The first one had a sudden change in plans that would've had me waiting around for over an hour. I politely declined. Had a nice time playing for them before. Maybe we can do another one, where we don't have the waiting period.

The second one is at an unfamiliar location out by the Lake, and I expressed a few misgivings about getting in and out of there plus sustaining interest on solo guitar for a couple hours. Never heard back. As the song goes, if the phone don't ring, you'll know it's me.

Yes, I've become a grumpy old man. I don't think I'd hire me either..

But that's become a consideration as I've gotten older. There have been more occasions than I'd like to admit,  coming home from gigs--even local ones if they're way on the West side or some other unfamiliar spot-- where I've gotten myself turned around and had to re-group.

That's one reason I don't do much evening stuff. The other being that I go to bed earlier. Again, old person stuff.

So there will be other things that will work out, down the road. In the meantime, I'm still workin' it here in the Lab. The YouTube page is doing well, and continuing to get new subscribers. And I hear from some of them too. So far they've been kind.

And as far as my getting lost, I know there's GPS. Even got it on this new-fangled phone of mine. Incidentally, I do have it figgered out, as far as the basics: receiving and transmitting, plus checking my voicemail. Just had to sit down for a second and goof with it.

So that's my latest stuff. Thanks as ever for stopping in and wading through it. Happy Thursday to you! For now, I'm outa here,. More later. 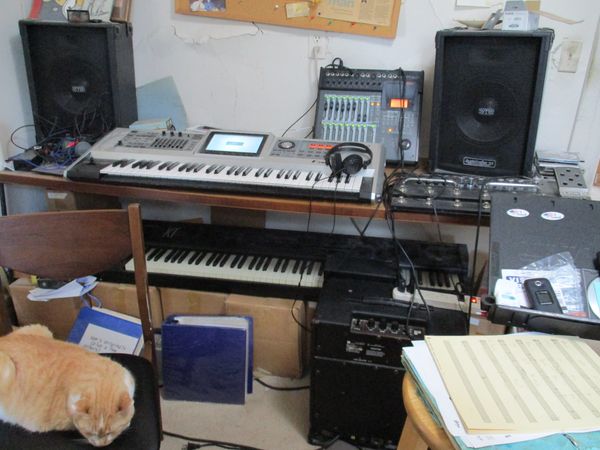