Good morning! 9:42 and 43 degrees on this sun n' clouds Tuesday. I've been up about an hour, and am nursing that first cup of Morning Joe. Never been a fan of black coffee, so I add something. Got my choice of creamers, just as long as they're sugar-free. You probably thought I was gonna say some form of booze..

Music news. Remembering the rivalry between what used to be our two major music stores. House of Music, at 3rd and North Grand; and Walko Music Co at 1120 So 2nd Street. Our two Barons were Ralph Sordyl and Steve Walko, whom we referred to as Robbin' Ralph and Stealin' Steve.

I was always more a partisan of Walko's, being that it was closer and my Dad had a long friendship with Steve. Took lessons there, and also gave lessons for many years. And I played more than a few gigs with him, both in Los Medicos Locos and his quartets. The quartet gigs ended, invariably, with Jingle Bells played at the finish of whatever we were playing.

On one occasion, which I believe was a Los Medicos Locos gig, there was some confusion on his part whether he wanted me on guitar or bass. Someone quipped, "Well they both cost the same!"

Back here in the present moment, I'm enjoying some prosperity as far as my music. Seriously though, I make about as much as Spongebob in streams and the occasional download. It's a ripoff. But I still enjoy every increase, however small. I actually keep track of it. Nice to know that somebody's listening to something out there..

Okay. That's pretty much all I've got for you for today. Thanks as ever for stopping in and reading. I do appreciate it! More statistics.. For now, ich bin outa here. More later. 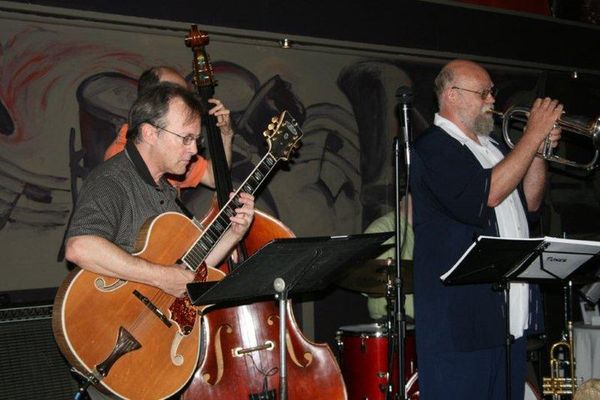